Who thought that there would be some much to learn re computers when it comes to spinning/knitting/dyeing etc?!  I spent yesterday changing patterns to pdf and uploading pictures patterns etc.  My very small brain meant that the whole process took about three times longer than it should have done and involved hitting my head on the table while Mark & Myra (knit-wise)  brought me cups of tea and made there there sounds.

But here it is, the uploaded, new photographed Alice Scarf and Beanie which was first published in Knit on the net by computer types but now is on ravelry as a pdf download for free, done by me!!  I only needed tech support on ravelry about three times! Now I've done it, I think I'll do it again. 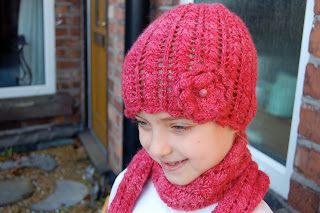 Here is lovely Millie is her best Cherly Cole staring into middle distance pose (some models have just got it you know!)  She was very brave because it was a bit chilly. 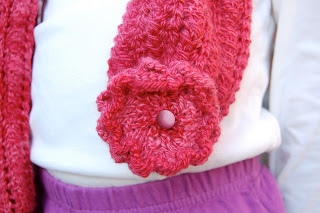 Here's a close up of the flower which can be embellished with buttons, beads, or if you're a fan of felted balls you could do a little one and put it in the middle.  I've used my own handspun yarn in double knitting for this scarf (you could use any yarn, but don't tell anyone).

I'll be uploading again soon.  (If I say it here, it means I have to do it)

Oooh what a lovely hat and scarf combo. Will definitely be checking it out later :)