None of us want to be accused of wasting anything these days -frugal is very much the way forward.  Ask my daughter who has manfully tried to put on a brave face despite clearly disliking fried potato cakes (from last nights mash). She's a trouper!

So no dyer worth her salt would leave any dye in her pot that had not been soaked up by fibres!

I dyed some dark blue/navy merino fibres for the felted lilies that I rambled on about in the last post.  I'd also dyed some red dye for the little kits that go along with the Lydia flower on the same day and there was clearly way too much dye just to throw down the drain.  From a money point of view but also from a green angle - you can't just be tipping it away! 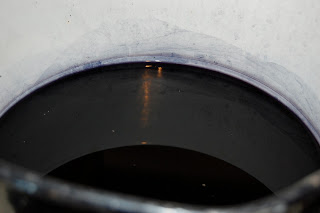 So I decided to do a little experiement and post it on here - would the resulting left over dye be anything to shout about. I was soooo tempted to stick some other colours in there with the blue, it looked a little bit boring and insiped - but in the interests of a deeply important and scientific experiment I let it be and didn't interfere in any way.

With the blue dye, I had clearly not thought everything through (see, it didn't stay scientific for long) and weighed out too many fibres for the amount of dye water that remained in the pot so already the insipid dye was going to be watered down further. ( I feel this lack of attention to detail will limit my attempts at a nobel prize).  With the red dye, there was plenty of water so the 200g of merino just went straight in.  I also put an extra glug of vinegar in for good measure - I don't like dye that runs. 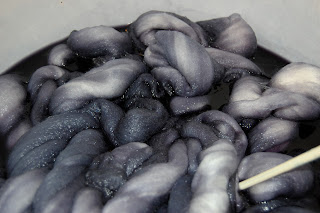 The resulting blue  fibres  I really like - they have a smoky grey hue to them and I'd like to spin them up.  I think that I have slightly felted them which is annoying, but not so much that I couldn't spin them so I'll keep them for me. Me me me. 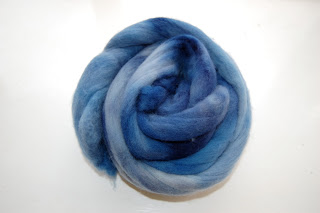 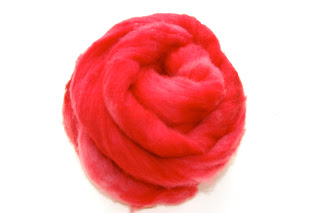 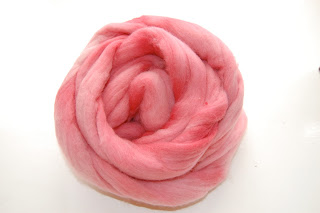 Is it lovely or is it insipid?

While I do think that it's important not to pollute, or to waste dye, I also think that it's no good having lots of dyed fibres in colours you don't like waiting for a project that you may never do.  The pink may stay.  I'll see....