We had a lovely day on Saturday at Knit-Wise at the spinning workshop.  There was just the three of us, Diane from Southport who brought with her just the prettiest wheel I have seen in a long time and Rachel who came all the way over from Wakefield as a birthday present from her friend Debbie. 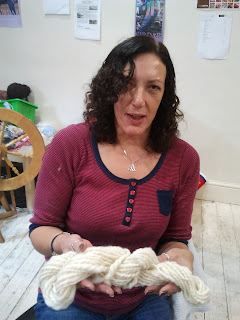 After dealing with the Ormskirk one way system for forty five minutes Debbie finally found somewhere to park and we were pleased that she'd stuck with it and hadn't turned on her heel and got straight back over the border back to Yorkshire.  Rachel took to spinning very quickly, although it feels like you're the slowest spinner in the west when you're a beginner, Rachel really did well and by the end of the day had two skeins, only equaled by Heather Two Skeins from September fame! 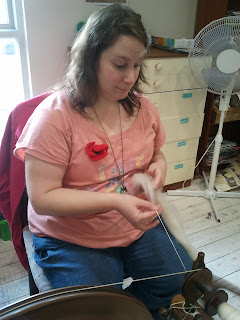 Diane had spun before and was coming to check her attaching the wool ability, which I have to say was just fine.  Remember that the fibres at the end of your tops or rolag want to join onto the leader,  but if you're relatively new at spinning or a little unsure, give it at least 10cm for those fibres to hold onto.   Lay the fibres underneath the leader and treadle a little, let the fibres attach and then slowly pull your tops or rolag down, letting the spin take hold of the fibres. The spin will make the fibres strong.  Practise it a few times, we all want to do it well but also remember that if you're a beginner, these things will come.  If you can't do it as well as you want for now, give it a little bit of a break and come back to it.  Long concentration and tiredness will all make learning difficulter.

Our next two workshops are full so we're looking a February now for classes which is just fantastic - more people wanting to learn is a great thing and helps keep the craft alive!

Just a note on Diane's wheel which was really the prettiest wheel I've ever seen, the photo doesn't do it justice, but (and I'm sure she wouldn't mind me saying) it was second hand. It just shows you that if you shop around you can find a wonderful second hand wheel without breaking the bank.  Before you part with your well earned, get in touch with your local guild and ask them to ask around, believe me there is a bargain to be had.