My first image has to be this - my friend Shirley has knitted up this bunting, with the word SPINNING on each flag.  She used my own handspun for each flag and it will be used for a window display at Knit-Wise in Ormskirk.  I'm so pleased with it I can't tell you. She's a bloomin marvel!  This photo was taken pretty quickly while we tried to avoid it being blown off the top of the boat in the wind! 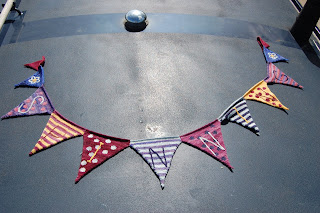 With the arrival of some beautiful weather last week, I got back to the dye pot.  It was lovely to get back to having a washing line full of fibres in fab colours.  I experimented particularly with this one and I wasn't sure whether it would look good once spun.  My original plan was to sell it for spinning fibres but I was too curious to let it go so I've spun it myself.  Can't help it!  As I was spinning the singles, I was a little bit worried that it was going to look good, but I shouldn't have worried, it's come out lovely. 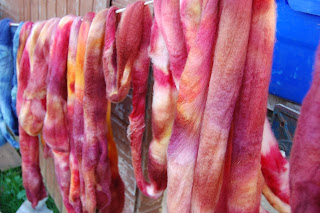 The spun yarn is deeper than the photos give the impression of, more gold and burgundy.  I'm really pleased with it, but I do need to stop wanting to spin everything myself.

I didn't get to Wonderwool Wales as I was teaching and manning the shop at Bowland Wool in the forest of Bowland.  It was such a beautiful day to be in spectacular surroundings.  I had just one student, Debbie who spun Bluefaced Leciester on her first bobbin, but, during the break went home to bring one of her own Alpaca fleeces back to spin.  It was such gorgeous fibre, light and soft, from Ellie the Alpaca.  With the second bobbin full, the fibres were plied to a zebra skein of BFL/Alpaca mix.  It was a lovely day. 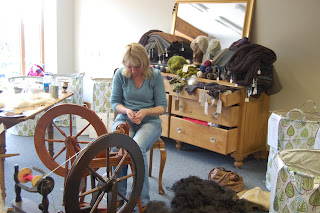 Finally, after my last leftovers post, I'll show you what I put the leftover fibres to.  It's by no means anywhere finished as I've run out of the edging fibres but it's on its way. Things will all be a little slower over the easter hols what with children, friends, parties etc but I'll try and get as much done as possible. I know you know how it is! 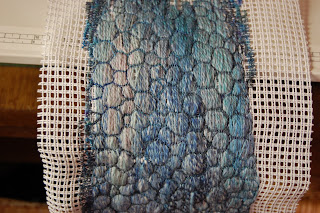 I'm taking a chance putting this on here as it's my open exhibition entry piece - what if they say no! I'm quite pleased so far, but it's early days and it isn't my opinion that counts.  You have to be brave though and have a go, don't you?

Now, I really do need to go and do some ironing. We're going to be going out in our dressing gowns at this rate!
Posted by lazykate at 05:04 No comments: