What a difference a ply makes

Ouch, that's such a nasty pun, I wouln't blame you if you're wincing right now.

I've been dyeing this particular dye shade for quite a few years now.  I first used the shades in the autumn when the blackberries were out and I picked dyes that I thought I could see in the foliage and berries, purples, lilacs and greens.  It's evolved differently every time I've done it, but here it is in two different plys.  The first is a chunky yarn,  (7pi) with thick and thin singles plied together.  I posted (I think) a scarf knitted up in this very yarn. 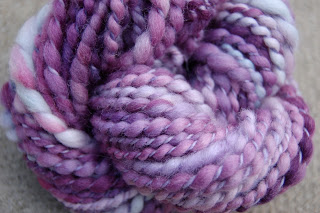 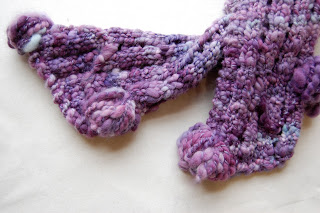 Today I've just finished plying up the same dye lot as a 4ply, (14wpi) and I'm hoping that this yarn will inspire a local button maker tomorrow.  I'll post some more information when I've had a deep and meaningful chat with her - and not before! 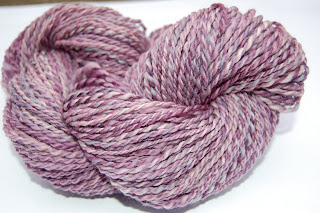 The lighting obviously different but I think that pulling those fibres into a thinner single makes the colours more muted, gentler somehow.  I like them both, but definately very different animals.

The dye lot is called Kizzie and is available on Etsy if you like it.  Thats all for now, just a quick one but I'll be back soon.

It did inspire me, I am busily creating new shades for matching buttons! Your wool is beautiful. I love how you manage to capture so many tones and shades in it. It was lovely to meet you and hope to catch up again soon for more brain storming!

I have a photo of a flower knitted up with your blue button in it and it looks perfect. I can't wait to show it here. Waiting for good light tomorrow afternoon, but I think you'll love it. The buttons are just wonderful