It's been a few weeks since I blogged, first there was Easter, holidays, children, entertaining children, tidying up after children.  Then I got the dreaded lurgy that every other person I've come across has had.  It's like the gift that keeps on giving, then a week in hospital that interfered with just EVERYTHING..... but we seem to all be getting back on our feet now.

The first new thing that I've got to show is this wonderful Lazykate.  Remember Super Jim who makes my Niddy Noddies?  Well he has turned his attention away from getting the economy back on track (and did you notice we've headed into a double dip recession since he did) to think about all the things that drive spinners mad. 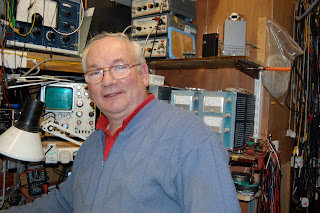 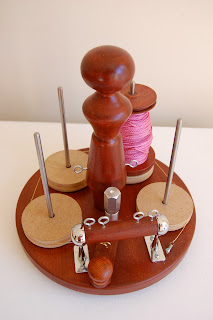 This lazykate works on a table or on the floor, it's perfectly balanced.  It has a brake system so that the singles will not twist back on themselves, which has driven me mad in the past.  It holds four bobbins so you can experiment with all kinds of art yarn. 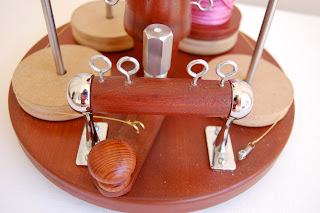 Jim, being a retired engineer put an AWFUL lot of thought into everything he produces and takes a great pride in his work, so I'm really happy to put his creations on my etsy page.

I had a big sort out of all my fibres and got myself organised today which is a weight off my mind.   I tend to keep fibres and yarn separate, some on etsy and some for sale at shops or craft fairs.  I don't want to not have the thing I've offered for sale.  But the worst case scenario happened this week when fibres on etsy sold at the same time as someone bought them in a shop.  It's a hazard of selling this way but, Carol who bought the etsy fibres was very understanding of the wait that she had while I sorted this out.  Thanks Carol.

So after my big reorganisation today I've decided to get the stuff out there.  Don't keep it back.  So I'll be uploading new fibres and yarn to etsy over the next few days .  And when it's on there I'll still be offering it at craft fairs and lys.  (I know, Alan Sugar hasn't got much to worry about)

I was inspired this week by Woolly Wormhead's blog entitled It's All Part of the Process, where she discusses her own personal design journey.  She doesn't follow the conventional route but still achieves the most original and professional designs.  If you have not been able to attend a college or university, if you are mainly self taught and follow your heart, you can still be proud, what's good is good.  Sometimes we all need to remember that.