I haven't blogged for a little while, partly because the school holidays made any type of routine difficult and partly because there wasn't really a lot in my head, but I'm back in the saddle again and so here's a short recap of some of what's been going on. 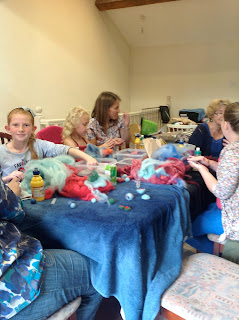 I had a mixture of workshops over the summer, including spinning at Knit-Wise in Ormskirk and also Wickerwool at Cedar Farm in Mawdesley  and feltmaking and we did children's workshops at Knit-Wise 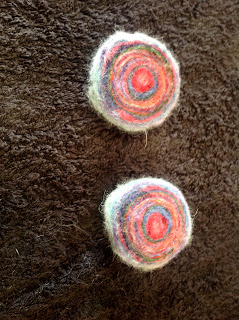 Children's workshops of layered felt balls went well, young girls, hot water and craft knives did fill my heart a little bit with dread, but all went well and no limbs were lost.  Or even maimed.

The kids seemed very happy and one or two came back for two classes so I was very pleased with that, return visitors are always welcome.

I was very impressed with the girls and how they handles themselves with a tricky bit of work.  They were extremely independent, required no assistance and sliced through those dense fibres without a second thought.

When I wasn't subjecting other peoples children to dangerous activitIes, my own was on an activity day on a high wire, (very pleased I wasn't there to watch).

She's now at the point where she is helping out with the dyeing for etsy and came up with this colourway which I absolutely love and which sold pretty quickly, there's just one left, although we'll be doing another dyelot very soon. 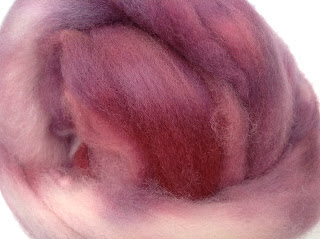 It's always nice to dye with other people (who wants to die alone?).  But it's always good to see what other people choose, especially children who have, or seemingly have no inhibitions.  This dyelot for instance wasn't a first choice of mine but sold immediately 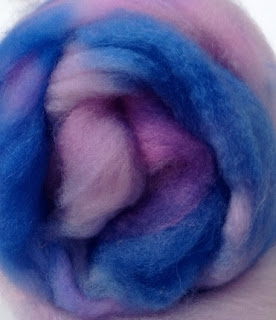 I think that's the balancing act of being a dyer, it's important of course to follow your own instinct, but at the same time not to be so set in your ways and to be a bit 'out there' sometimes.  To be braver with choices of colour.

We spent time foraging for sloes and damsons for Gin and collected quite an amount (a good kilner jars worth anyway). 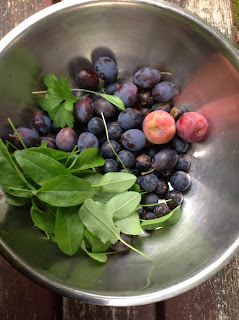 But, along the way also came across this 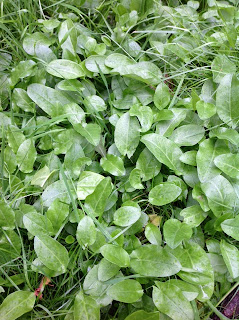 This is wild sorrel and the trustworthy advice from John Wright, Hugh FW's forager says to wash it and eat it in an omlette. He also said that ate in reckless amounts can cause vomiting, muscular twitching, convulsions, renal failure and cardiac arrest.

Unsure exactly what a reckless amount was, (isn't one man's reckless another man's run of the mill?) I put about a desertspoon into my omlette.  I admit it was mainly egg but I still counted it as one of my five a day and I lived to tell the tale. 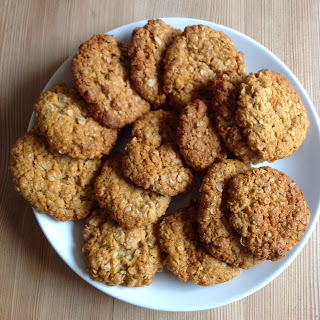 Finally, I promised to put a very very easy biscuit recipe on here on account of my nephew George, because he ate them, despite them containing oats.  He didn't know that and we're all not going to tell him.... because we count them as one of our five a day too.  Well, don't you?

1)  Mix together porridge oats and flour
2)  Melt butter in a large pan with sugar and syrup
3)  Stir bicarbonate of soda into mixture in pan
4)  Add flour and oats and mix well
5)  Make walnut sized balls of mixture and place them, well apart because they will spread, on well
greased baking sheets
6)  Bake in a moderate oven, Gas 4, 350F  180C for 11 to 15 minutes, take them out while still gooey
7)  Let cookies cool slightly on baking sheet before removing them to a cooling wire